As a 25-year-old single mum of three living on a council estate in Brixton thirty years ago, I would never have believed that I could have had the career in technology that I have today. When I think back to that time and who I had as a role model, the people that spring to mind are Maya Angelou, Oprah Winfrey and Nelson Mandela.

I was inspired to keep going through difficult times by Maya Angelou’s wonderful books, by Oprah’s TV show and by Nelson Mandela’s calm, good-natured fortitude throughout years of struggle to become the first black South African president. Each of them helped me to think that it is possible to have a successful life, overcoming major challenges and hardships.

Yet who was around in my life to inspire me to become a tech or STEM pioneer at that time? No one that I can think of.

30 years later, I’ve had a great career in tech. Inspired by my role models, I’ve kept going through some very difficult times to have a successful career.

Have role models been helpful to me? Absolutely! Is it easier to find a way through the forest with a path to follow? Of course. Role models who have overcome adversity in their lives have shown me that it is possible, without them I have no idea where I would be now.

Role models are more important for women than for men

My first real life role model that I met in person was Dame Professor Wendy Hall. She gave a talk at a British Computer Society event many years ago. I remember sitting in the audience thinking to myself “I want to be just like Wendy”. She was smart, funny, down to earth and an amazing tech pioneer. At the end of her talk I asked her if she would mentor me. She very kindly said that she would love to but didn’t have time. I thought for a second and then asked Wendy if I could have just one hour per year. Amazingly she agreed. That was probably 20 years ago now.

I’m sure Wendy doesn’t realise how much of a difference she has made in my life and career by giving me such a small amount of time. Wendy is now a friend and still a great role model for me.

She introduced me to Dame Stephanie (Steve) Shirley many years ago. I knew what an incredible tech pioneer Steve was having set up F International, one of the UK’s first highly successful software houses in the 1960’s employing mainly mums programming from home.

The first time Steve spoke to me she thanked me for setting up BCSWomen, I was so overawed that I burst into tears. I couldn’t believe that such an incredible pioneering person was actually talking to me, let alone thanking me.

Role models are so important. Indeed, having a role model can help us to define our career. The CWJobs survey showed that nearly three-quarters (74%) of those without a role model haven’t decided upon a career direction compared to just 2 in 10 who have. And out of people who don’t have a role model, 4 in 5 respondents (80%) think that having one would have been beneficial for their career. The survey of 2,001 STEM workers shows that 73% of women in STEM are inspired by role models of the same gender. This figure for men is 59%. This doesn’t surprise me. Even though they account for half of the population, women only make up 17% of the STEM workforce.

When I was a PhD student I was encouraged to network at conferences by my PhD supervisor. As I was shy, I found this extremely difficult and had some uncomfortable encounters early on. It wasn’t until I went to a “Women in Science” conference in Brussels in 1998 that I realised that conferences could actually be fun.

That conference changed my life, rather than being stressed out the whole time I had the most fun ever and met loads of amazing women some of whom I’m still friends with today. I came back from that conference and set up the UK’s first online network for women in computing as I wanted other women to have the same experience of being in a majority. We can see from the results of the survey that role models are becoming increasingly important to young people with 7 out of 10 people aged 18-24 inspired by a role model to pursue their career. This highlights how important both traditional and social media are on particularly young people in influencing their career choices.

During my first public speech around the topic of women in tech, I mentioned that role models in traditional media, for instance having a cool tech-savvy woman on EastEnders, was the quickest way to increase the number of women in tech. My thinking then has now been superseded by social media. What people see around them has a massive effect on how they see themselves.

It would be great to see some really cool female vloggers gaining massive followings, showing that being tech-savvy is not just about coding, but about changing our lives, and the world, for the better. Thinking back to my role models, none of them were fiction, but I did find out about them all from books and the media. The one programme I looked forward to during the day when I was at home with three small children was the Oprah Winfrey Show. Oprah gave me an inspiring daily dose of “look what these people overcame, you can do it too”. I would also see Nelson Mandela on the news and read Maya Angelou’s incredible stories from her life. The media are so important in providing us with opportunities to create the lives we want for ourselves.

It’s upsetting to me that the results of this survey show that people in STEM are more aware of fictional characters like Sheldon Cooper in the programme Big Bang Theory than Bletchley Park codebreaker Alan Turing or the UK’s first astronaut Helen Sharman. I remember reading Helen’s book “Seize the moment” about applying for and gaining the position as sole British astronaut in the Russian Soyuz space mission when I had just finished my degree in 1993. Her story of battling through all the odds to be part of that mission was just so exciting. Helen Sharman then became a great role model for me. 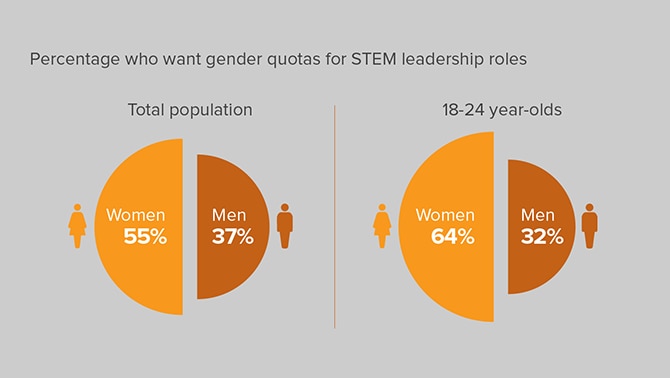 One of the great things about getting older, I’m now 56, is seeing patterns emerge across your lifetime which helps you to better understand the world around you. When I was in my 20s I thought that gender quotas were a terrible idea. I quite naively thought that everyone wanted a fairer world and that if we all just worked together that change would occur naturally.

Thirty years later my opinions have changed. I now know that’s not true. When I set up BCSWomen in 1998 there were about 15% women working in tech. Today, 21 years later, the statistics are about the same.

I think the only way that we will make a change in my lifetime is to have short-term quotas. I was pleasantly surprised to see in the survey results that 64% of young women 18-24 want quotas, and that over all ages groups 55% women and 37% men want gender quotas for STEM leadership roles. These figures give me hope that things are changing for the better.

We are moving in the right direction, but need more high profile female STEM role models in soaps like EastEnders, highlighted on the news, in the popular press, across social media. Change is coming, but it can’t be fast enough for me, I’ve been waiting a long time.